The drama begins with the script. In an overhead shot of a grey table, we see a woman’s hands lay down two scripts for Talking Business before she sits down on the table next to them. Her face is not visible. The sound of her actions and the highly amplified location sound of an empty room give way to the overblown music that typically accompanies dramatic moments on film or television. Black out. New scene, different screen. Same music. A medium shot now situates the table in a studio setting: green screen, prominent white lights, and a small portable projection screen in the back. The woman, perched on the table in blue violet overalls, faces away from the camera, while reading one of the scripts. She is accompanied by a second person, an elegant woman dressed in a dark suit with a thin black tie, sitting at the table, also reading the script. The music segues into a dialogue between two women; the sound quality of the recording suggests a film or TV soundtrack. An elderly female voice expresses uncertainty about how to greet another woman. “Mrs. Carrington” is the newcomer’s name as indicated by white text against the black background of the first screen, which serves as a kind of displaced subtitle/translation for the aural exchange. This text is progressively highlighted, Karaoke style, so we can speak or mouth along and thereby take part in the unfolding drama between the script and these women, between the written and the spoken word. By the time the third screen is activated and the studio setting returns, empty this time except for projected images of the women’s encounter on the rear screen, it has slowly become clear, that Kerstin Honeit’s three screen video installation Talking Business (2015) is much more about the business of talking than about the talk of business.

Talking Business turns on the tense initial meeting of Alexis Carrington Colby (Joan Collins) and Krystle Carrington (Linda Evans) in the first episode of the second season of the Reagan-era TV series Dynasty. But Honeit spares us the spectacle of the famous cat fights that marked the women’s relationship, secured the show’s ratings and guaranteed Alexis and Krystle a spot in the camp archive of drag impersonation. Instead, she cleverly subjects the scene of the women’s initial meeting to a series of displacements, from one screen to the other, from English to German, and–most strikingly–from on-screen pretense to off-screen investment.

The off-screen of Honeit’s Dynasty is peopled first and foremost by Gisela Fritsch and Ursula Heyer, the actresses who lent their voices to the characters of Alexis and Krystle for the German synchronized version of the show. Working closely with the two septuagenerian voice actresses–Gisela Fritsch sadly died during the course of their collaboration–Honeit teases out the tensions between speaking a part and playing it, between dubbing glamorous women and embodying them. At one point over the course of rehearsals with Honeit, Heyer reflects on the empowering act of employing Alexis’s turns of phrase in her daily life: “I thought if I use my own words, I won’t manage to engage people. But when I said a sentence like, ‚It’ll snow in hell before I see you again,‘ then people laughed.” “You were always so much more Alexis than I was Krystle,” notes Fritsch. 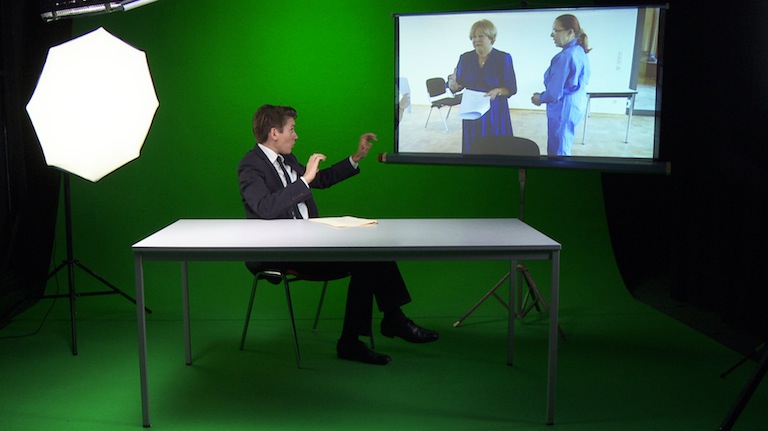 Talking Business is a further contribution to Honeit’s ongoing artistic investigation of the voice, embodiment, and the technologies of audio-visual synchronization. Think for instance, of her earlier installations On and Off (2010) and Pigs in Progress (2013). Whereas in these pieces, Honeit employs her own body as the site of synchronization – the space from which social and political discourse speaks – Talking Business focuses instead on the bodies of professional actresses known primarily for their voices. Honeit is, of course, still visible in Talking Business. She’s the elegant woman in the aforementioned shot, the dandy recognizable from her other work. In the studio setting, she even dubs herself from earlier rehearsal footage with the actresses. Throughout the piece, however, she functions more like a moderator, who enables Heyer and Fritsch to give voice not merely to the words written for famous TV stars, but to those describing their own conflicted relationship to female embodiment and mediated presence.

That said, Talking Business does not strive to present some kind of demystified real life that was obscured by the fictions of a script or the industrial and technological production of glamor. What Honeit’s after is rather a critical laying bare of “the technologies of gender,” to invoke a concept from film theorist Teresa De Lauretis. That becomes clear in one of the most powerful moments in this new work. We hear an audio recording of Heyer’s resonant voice as the affected Alexis, and at the same time watch archival footage of the actress‘ transformation into Joan Collins at the hands of a hair and makeup artist. We see as well–on another screen–an image of a spinning reel-to-reel audio player atop Heyer’s newspaper clippings about her life as Carrington/Collins. Honeit’s synchronization of sound and images across these screens brings into focus the mediated and discursive production of a split female subjectivity, one produced at the intersection of representation and self-representation, at the crossroads of social technologies, institutional and critical discourses, and media practices. 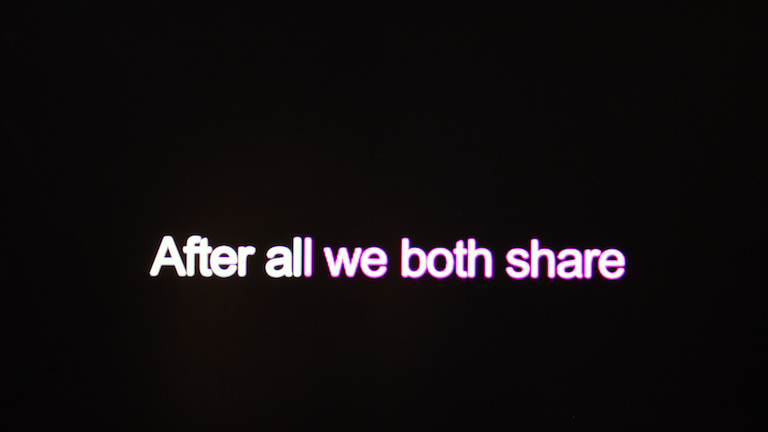 And the third screen? That one’s reserved for amateurs like us, to read along and engage in our own acts of synchronization, however invested or subdued they may be in the space of a commercial gallery. Honeit’s gesture towards interactivity does not necessarily implicate gallery visitors in talking business, but it certainly gives us a chance to experience how awkward, alienating and empowering it can feel to take a screen star’s words into your own mouth.

Talking Business was awarded by Monitoring (an exhibition of time based media as part of the Kasseler Documentary Festival).

The Jurys’ statement: In Talking Business, Kerstin Honeit explicitly, yet elegantly, breaks through the hidden mechanisms of media presentation. Role playing is made obvious, re-staged, interpreted and recycled in form of artistic self-references. Icons are dressed down and cycled back into the whys and wherefores of everyday life. What do we mean when we speak the language of media – and who is speaking?